From 12 Historical Women Who Gave No F*cks

My two reading matters, one bigger bestia than the other. Piran, Slovenia. Photo: a © signature mmm production 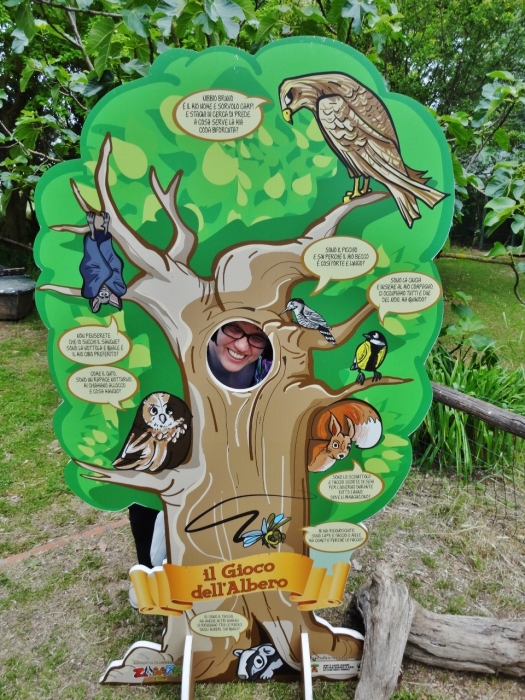 Today celebrates mom’s cousin, our Soul with the capital S. She paints, designs jewellery, sows and learns Italian, to name but a few.

When she last visited us (pridi cai is still standing!) she brought me a very special gift (well, not only that, there was also her painting!): a fifty-year-old book titled “Nuova poesia Jugoslava” (“New Yugoslav Poetry”) with poems of ex-Yugoslav, that is to say Slovenian, Croatian, Bosnian, Serbian, and Macedonian poets, in original and Italian language side by side. 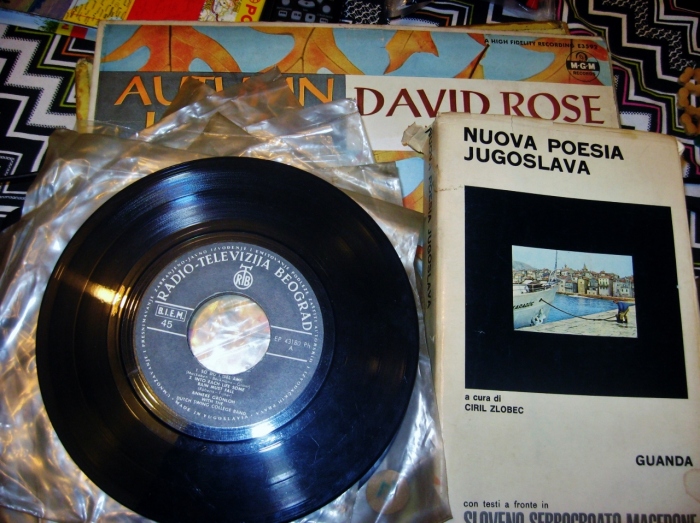 She already requested one poem from there to use in her Italian class, and here is another by Slovenian poet Kajetan Kovič, in English (found online) and Italian (from the book). I loved this poem growing up and had it in my scrap book which has since been replaced with this blog. I dedicate it to her cleaning robot. 😀

I robot
Translated by Giacomo Scotti

Here is another text that she can use for her Italian class, the song that is currently everywhere in Italy. Francesca Michielin ended up second in Sanremo and will represent Italy at this year’s Eurovision Song Contest. Indeed, there is no degree of separation.

And here, let me give Soul back a little present that she made for me and I have it right here at all times. (It’s NOT limoncello!) 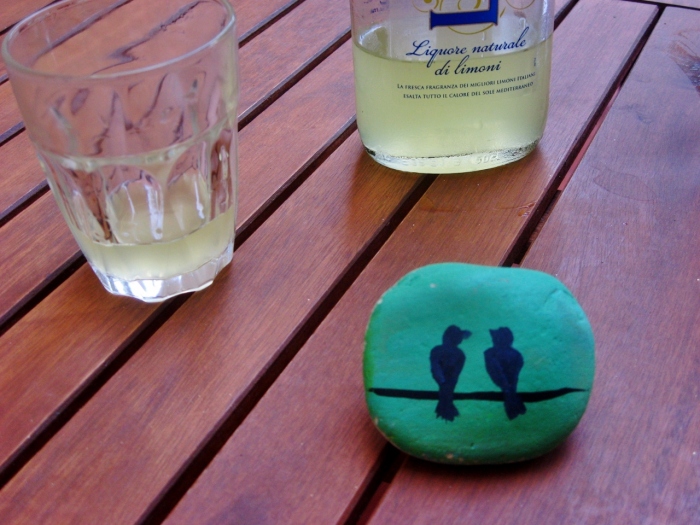 “You know what children, artists and madmen have in common: they know that everything in this world happens for the first time. There are no repeat performances.” —Vitomil Zupan

For this week’s Thursday Doors we take a look at Križanke, which translates as crosswords. It is a splendid concert venue in my original hometown Ljubljana in Slovenia, which architect Jože Plečnik created next to a church and inside a courtyard of a former monastery.

In the photo above there is the entrance to the church. To the right there is the City Museum of Ljubljana (last photo below) and to the left there is the main entrance to the venue. Apart from a number of local artists, the concerts that I have experienced here range from Dog Eat Dog & Biohazard, Henry Rollins Band, Duran Duran, Smashing Pumpkins, The Pixies, The Sugarcubes (with Bjork) to Nick Cave, Bobby McFerrin, Linton Kwesi Johnson, Lou Reed, Manu Chao and a variety of world music artists at the annual Druga godba festival. 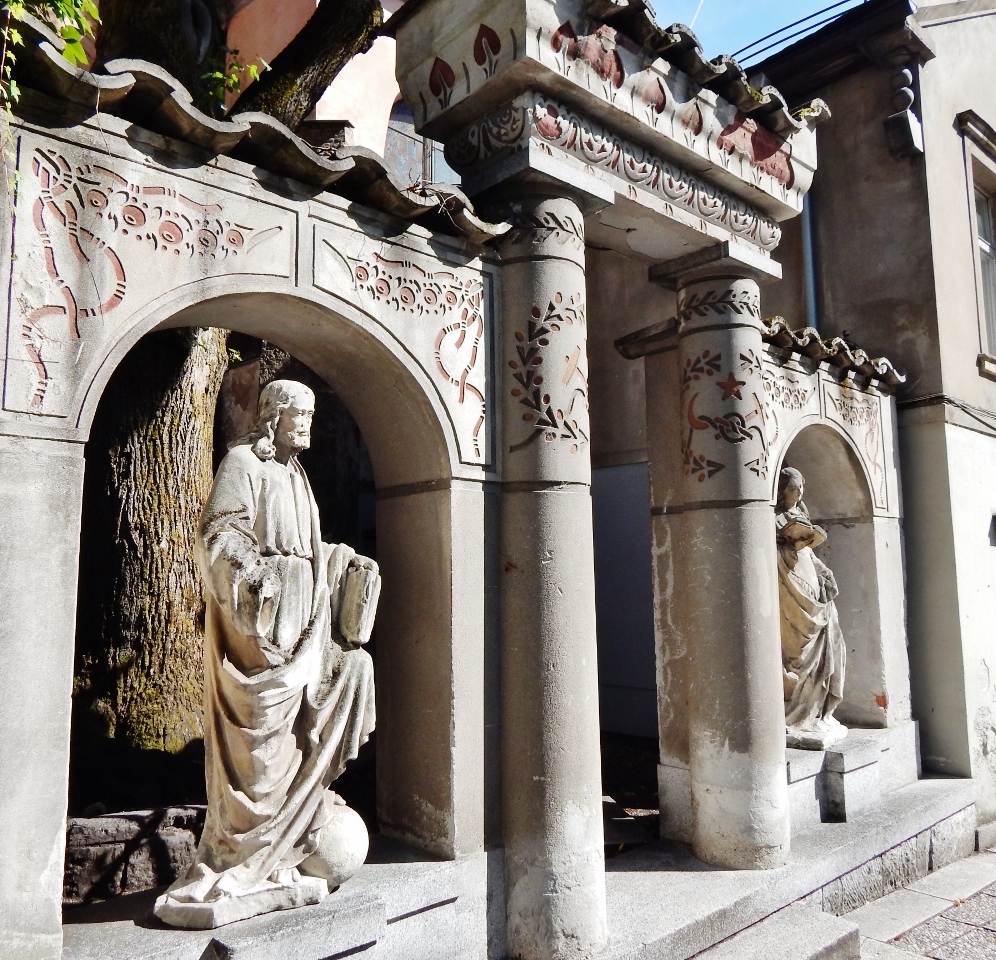 The first courtyard of Križanke theatre.

Here drinks are served during concerts and mingling goes on.

A sculpture next to the entrance to the venue.

A neighbour: City Museum of Ljubljana

I don’t have any photos of the main theatre, which is open-air but has a roof, but I do have some from the other side of the wall. Those without a ticket used to sit all around the venue on benches, happy to have a smoke and a drink and a listen. True: some also seized a chance when the security were engaged elsewhere and climbed the fence. Not any more. The noise of the crowd and traffic outside could reach such levels that some “sensitive” performers demanded that not only the street closes for traffic but that people are prohibited from strolling outside as well. As you can imagine, this action spurred civil protests. Concert noise police: another thing that happens if you live long enough.

Another door! For the back door men and for sitting on the steps unless 2 Cellos play, for example. Behind the roof above the stage. 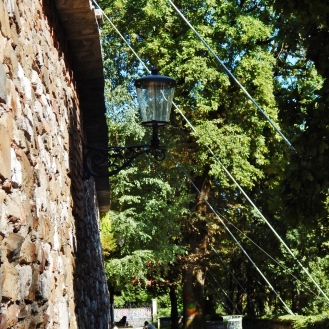 Wires that hold the up the roof, and the ‘forbidden’ benches. 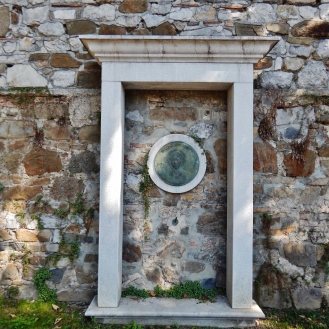 The monument to Slovenian poet Srečko Kosovel on the wall surrounding the venue.

To conclude: first one of his poems in English (I let somebody else translate for a change) followed by the original, and then the Križanke church in its entirety.

A Small Coat
by Srečko Kosovel

I would like to walk around
in a small coat of
words.

But hidden underneath should be
a warm, bright world.

What is wealth?
What is luxury?
For me it is this:
a small coat I have,
and this coat is like
no other. 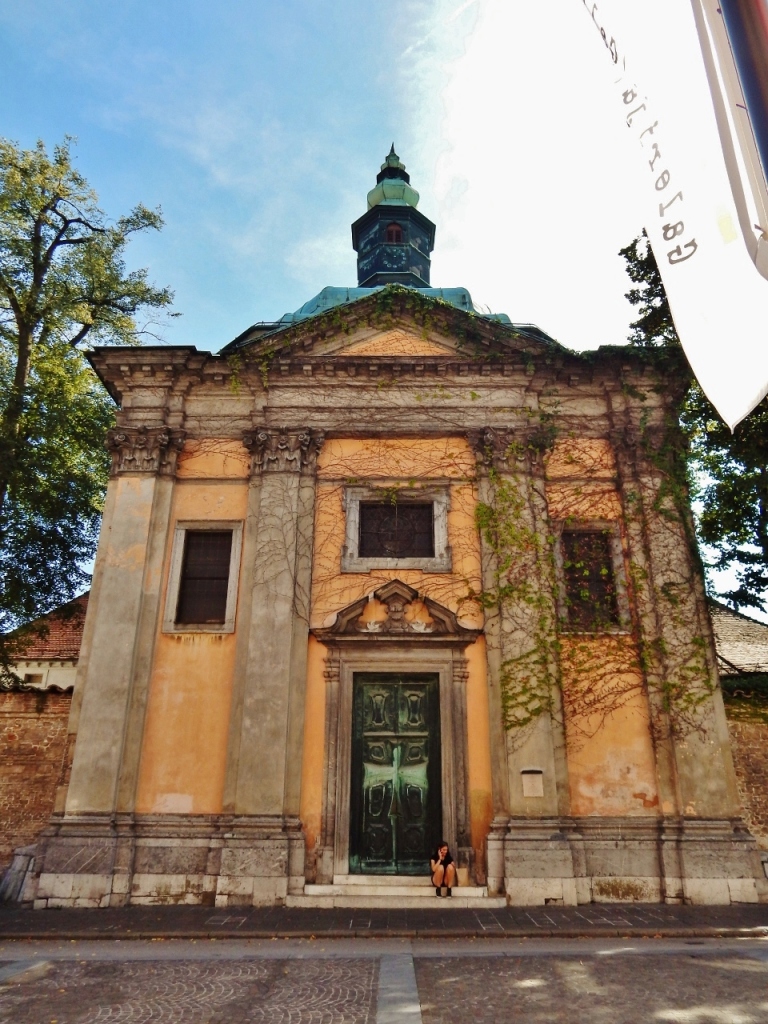 Here are some examples of how we stay connected. Photos are in couples as it should be. (Also, nothing has to do with Connecticut.)

First it’s the wires and the flowers. Bežigrad, Ljubljana. 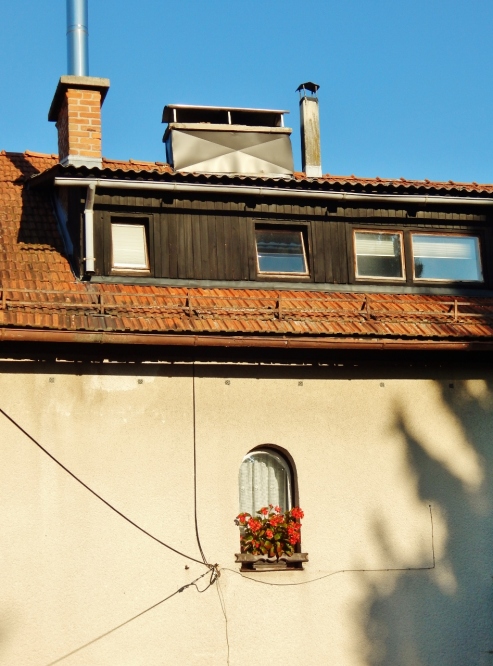 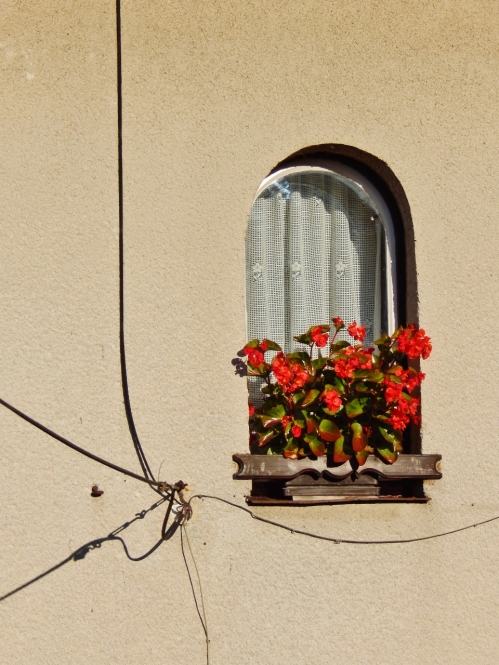 More wires and flowers and a pigeon, in Piran. 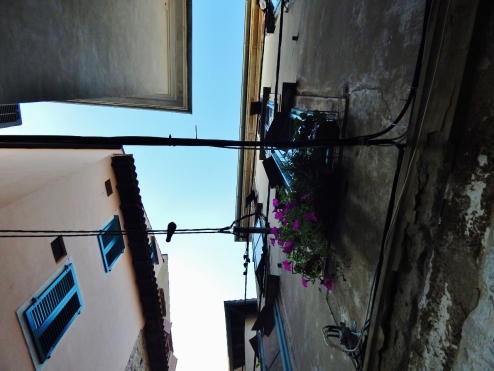 More and more often a quiet spot is needed to connect. In Piran. 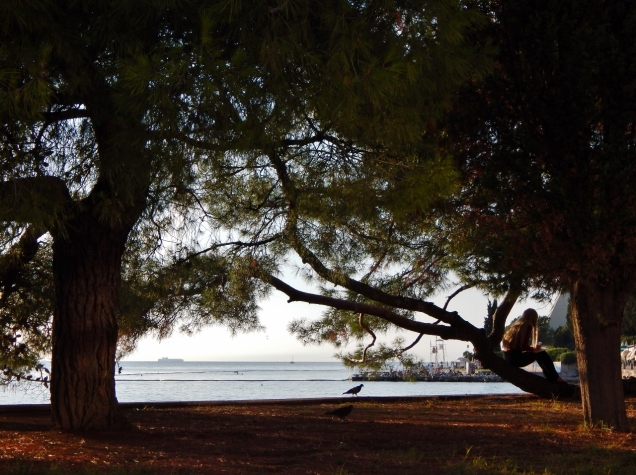 Up on Tinjan, on Italian-Slovenian border, and the view off it.

Piran, the board next to the monument erected on the occasion of Slovenia’s entry into the European Union. Translated, the poem by Slovenian poet Tone Pavček goes like this: The sun travels from the East to the West, making people happy here and there. Let us be the sun! (Translated by MM) 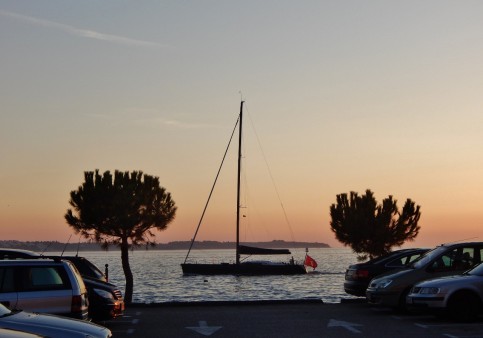 And then it’s again the bike and the leash and home. 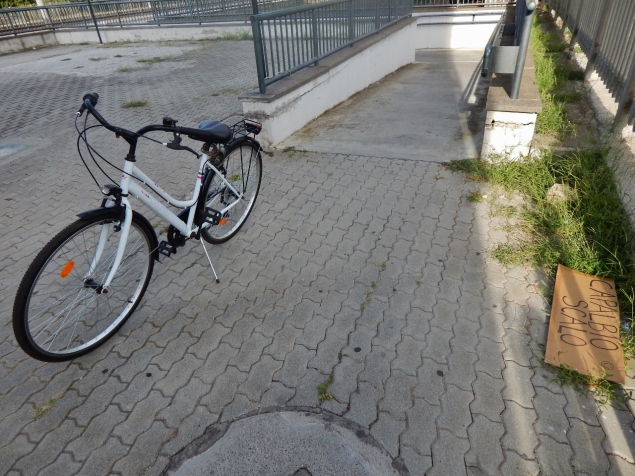 But my favourite ways of connecting go something like this. Photos from two of my recent posts (first: Ljubljana, second: Piran). 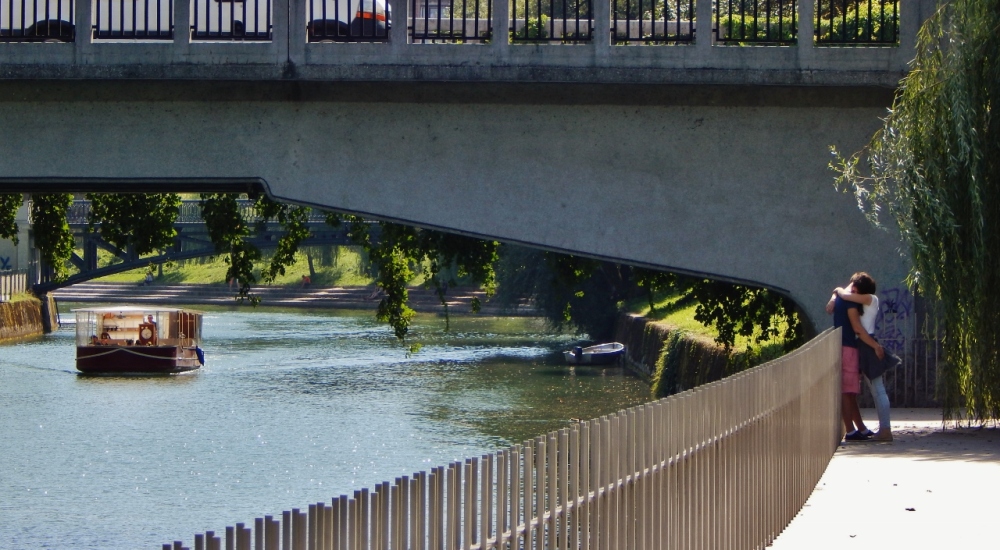 In response to The Daily Post’s weekly photo challenge: “Connected.”

ADD-IT: This post has a part II. on my new blog right here.

Once there were raspberries (Maline so, by Tomaž Šalamun). Now there are jellyfish (=Meduze, by Matter). Yes, I just put the greatest Slovenian poet and the youngest Slovenian hiphop-something (not identified yet) band into one post. Not only is the music hooking, but the text equally makes raspberry-type sense (=nah). In short – I’m bought (or is it sold?) Give it a try.

The Haymaker
by Tone Kuntner

You were a haymaker
in a flowery skirt.
It was a lovely day,

it was a lovely day.

For a long time after
we shed a whiff of hay.

Today celebrates my mother. You really should get to know her.

People say that we grow to become our parents, boys grow into fathers, daughters grow into moms. Am I lucky in that regard! This is what awaits me: 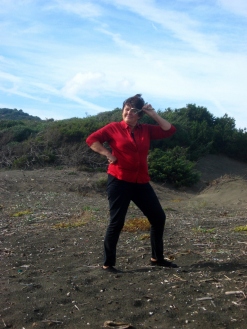 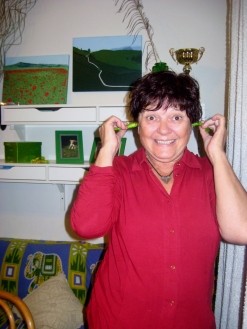 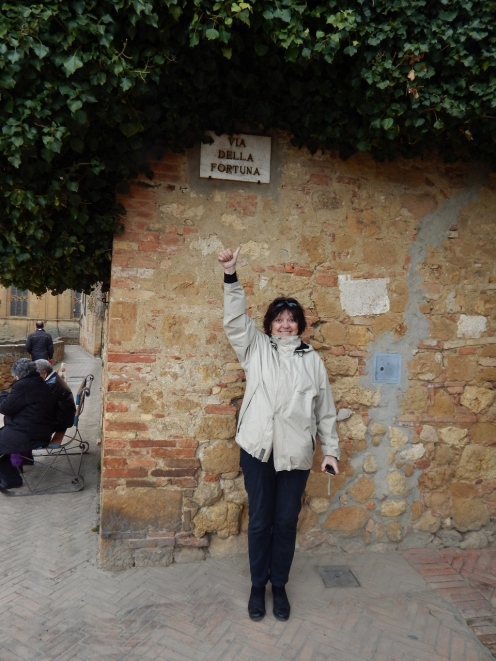 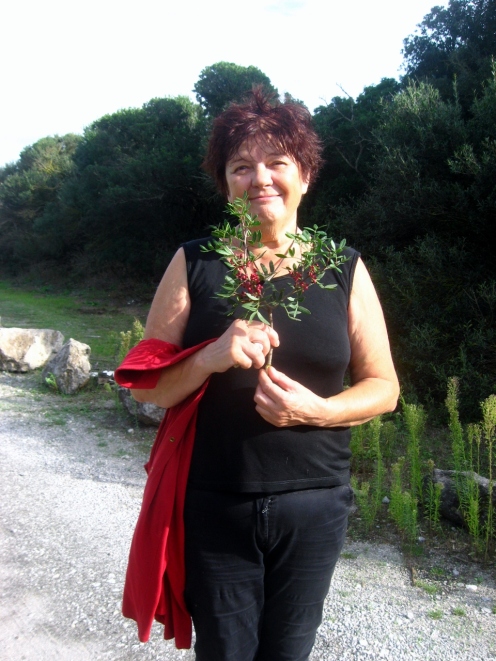 She loves bestia, to read and to make others happy (that car race must have been really the last thing she wished to see but it was my birthday). 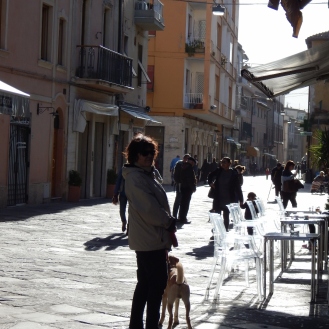 There is much more about her, though. Not only she must be the oldest Slovenian rapper (here in my old, “skater” shirt),

she also writes poems. Here is one from her first collection of poems for children, illustrated by Mina Fina and published in Slovenian:

I translated it into English because I would really like for the whole world to enjoy her poems (another one is here, soon the translations will make a book as well). Now it sounds like this:

What boys do in preschool
Translated by Manja Maksimovič

Fred, you throw pieces of bread
On top of my head
Nate, you’re pulling my braid
When the table is laid
Boon, you hide my cartoon
And blow my balloon
Zak, you push me in the back
When we play in the shack
Sly, you make me cry
When you steal my pie
Just Clyde is so very polite
He gives me chocolate, I bite.

And this is what I could add (hippies, like partisans, will NEVER die out, no matter how others count on old age to do them in):

Maybe it will all really be okay, mom. Imagine that! I’m happy that you like what I did to your poem. Wishing you a happy heart (and many more heart-shaped stones that you collect and can be seen on the top photo), a peaceful soul and calm sea. Happy birthday! 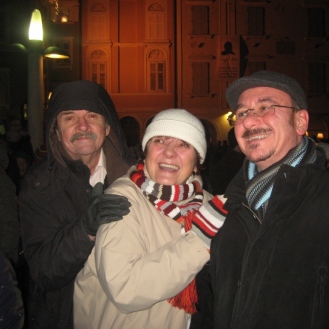 It was 20 years ago. We were in K4, our Thursday and Saturday retreat, and a song was often played, by a Slovenian band, they said, even though the song was called Happy Office and the band Siddharta.

I remembered. I just tried to google it to see under what (Slovenian) name this song later emerged when they published their first album and (almost all) songs were in Slovenian. But there are no hits. And yet, I remember.

In time the band has grown into (arguably, like everything) THE greatest Slovenian band. These days they celebrate their 20th anniversary.

This is my favourite song by them, and that’s why I translated the lyrics into English too, no matter how untranslatable they may be. But that’s quite all right, I’m always in favour of doing it your way.

And where the limits are, only you know, guys.

Hidden in the sea
submerged in the world of Dalantik
the clan of “little people”
has concluded their beliefs
where let it be seen
let it be seen, the laughter caught
between the utopias of shredded phenomena
and the ideas of quasi grand people.

It sounds nice:
another soul, same material,
every hand, cheek and body
every mind goes skyward
when the unrest is winding
when the rest is unwinding all the marked ones
and only the “dog” on the wall shall remain
keep marking the people for years to come.

It’s enough that the little one
has no idea where and when he’ll sleep tonight
and whether he’ll get up in the morning;
so let paranoia choke you
paranoia choke and drown you,
for they were only killing
only killing the invitees.

A dog before the wall, behind it: Orvieto, photo: MM.

Once upon a time I met Boris A. Novak (Anorak for friends, which we aren’t).

We had a little chat and I told him which my favourite poem of his (and one of the best worldwide) will always be. This one:

Then I added that I’m a translator and my wish is to translate this poem into English. He gave a little chuckle with the undertone “Impossible”. I like impossible things. Here it is.

Waterfall, by Boris A. Novak

I ask his friends if they can kindly notify him of this milestone. Thank you!

Plenty of people you have never met.

Translated from Slovenian by Manja Maksimovič

Driving through a village our car startled a horse
the driver had a scare, we all had a scare
and it was spring.
After that we drank red wine sitting under the awning
of a very old farmhouse.
The nationalised landowner joined us
the regional party secretary joined us
the feeble-minded shepherd joined us
the old wrinkly parson joined us
and everybody agreed
that it was a lovely spring.
My travelling companion said what a lovely valley this was
and everybody just nodded.
The shepherd with forget-me-not eyes
– they say that after a fall his mind is gone –
laughed and wiped the drool off
he said in a high-pitched voice:
The horse knew well why he bolted.

There once was a board on my wall:

It included many things, memories, places, each item deserving a special entry. Look, there is Trpanj and a little English town in the middle of nowhere, and postcards from A. and R. and one of a huge rock made of shells in Karpathos, which we first bought and then located the rock in nature and it was nowhere as huge as it appears, and the Kiss, and the little pin calling for 40 days without alcohol, which N. gave me for my 40th birthday and I didn’t see the zero and said: “Oh, four days, I can do that!”, and Jeanette, and Slavoj’s hand, and Mickey, and my tarok cards, and a very old cartoon from Mladina magazine saying “Sad ću ja turbo da uključim” (I’ll switch to turbo now), and poems: e.e., Kosovel, a short one on tango, and this one by Austrian poet, here in the original:

I just found this poem translated into English by Peter Lach – Newinsky in his Word and image lab:

How I do the first:

How I do the second:

But sometimes it happens that a poem really comes to life in a completely obscure little language, such as ours (close-up from the board, the postcard with the poem used to be distributed freely in a Ljubljana bookshop).