I have it in my genes, basketball, baloncesto, pallacanestro, košarka. I was born in 1970, right in the middle of the world championship held in several cities in the country of my birth, including my home town. At the end of it, Yugoslavia, richer for one little fan, won the title of the world champion. The cheer of the moment was: Luna vaša, zlata naša (“The moon is yours, the gold is ours”).

Mom still likes to tell me what a good girl I was during the matches, not crying at all. Even though no taller than me at 1.70 m, she was a mean forward in her youth and beyond, hitting three-pointers way before they were invented. My dad, much taller himself, was playing it too. Yet when I started my own training at school, I soon discovered something was off: I could never understand why the first half hour must consist of running.

When I was watching the maestros of Yugoslav basketball in the 70’s and 80’s right up to Dražen Petrović, who was the most inspired player up to date in my book (and died tragically in 1993, see the emotional documentary Once Brothers), I of course understood the need for speed, but transferred to my own body it just didn’t add up. My strengths were the awareness of having hit the basket even before the ball left my hands, quick hands in defence and mean passes.

So, instead of making any kind of team, I played on the school court after school. Most often than not, there was no other girl in sight, it was just me and the guys. I don’t know why they tolerated me in their midst. If you ask my friend (yes, Bobitch, you!), playing basketball against girls is no fun because you cannot be as physical. Maybe the times were not as physical then. Maybe lack of defence enabled my scoring. Last but not least, maybe it’s because the ball we played with was mine. My parents gave it to me and it had been signed by Chinese players for some reason. Anyhow, I was loving it.

When I reached high school and landed in a girl-only class adorned with ONE guy and realised here volleyball was the name of the game, at least for girls, I was devastated. Not only did I lack experience, I was missing the camaraderie. So it often happened that while my classmates were whisked out to have a run to the top of the castle (yeah, I know!), I hid away and joined the guys at the basketball court. They needed to be gathered from all the classes and still they were barely enough to make two teams.

One of the classmates was a basket fan too and we often went to home games in Tivoli Hall, the home of Olimpija, Ljubljana. Different sponsors added their brand names with years, so it was Smelt Olimpija at one time, Union Olimpija later. The love was such that the first time we visited Greece, my sis and my friends and I went first straight to the town of Olympia, with the original ancient stadium and all, and sent our team a postcard. We wrote their names next to statues of Greek gods, Kraljevič was the tallest and Milko the cutest:

This was around the year of Olimpija’s most memorable season in the Euroleague when they reached the final four. My friend (yes, Bobitch, you!) organised for my sister and me to be included in the official fan club, the Green Dragons. This meant that we could join them in the stands at home games as they were doing their chants (I’m quite sure they were the creators of the most famous Slovenian chant that can be heard at any sport event: Kdor ne skače, ni Sloven’c – “Who doesn’t jump is not a Slovenian”). They wove such a pressure curtain in Tivoli that teams like Barcelona, Panathinaikos and Kinder Bologna were known to lose by up to 30 points. (You would say that such a game is boring but you know it’s my favourite kind). Well, not by themselves, they did it together with the players and the coach, Zmago Sagadin.

Sagadin was a coach inclined to terrorising, who made them train their socks off, New Year holidays or not. He believed in winning the jump, sharing the playing time among all his players (as long as they signed his idea of contract), using the offence till the last millisecond, and passive-aggressive defence. I loved his confidence when talking to the press, his predictions of what will happen in the second half and then it did, his reluctance to take the first time-out of the game before the other coach: it was just like admitting to having started the game in a wrong way.

In their final-four season, after losing the first game against Stefanel Milano, who was the last opponent to beat to enter the final four, Sagadin was so infuriated with his starting five that he used the remaining five players to start the next game. It worked splendidly, they won and it was 1:1. The next game was the decisive one, and my friend managed to get my sis and me the tickets and the bus ride to Milan, with him as our body guard. There were to be dragons.

There were many buses of us. My sis and I were the only girls on ours. We sat in the front seats with our friend behind us creating a wall, trying to be invisible for the duration of travel, sensing the proceedings around us as if on screen: we heard the sounds from the porn being played on vcr, we saw the dragons appear with all kinds of junk after every pit stop, having just robbed the gas station, we listened to the incredibly loud, forceful, repeated Italia, Italia, va fan culo!, we watched how we got police escort after crossing the border into Italy and were only allowed to stop and pee in the middle of nowhere.

The game itself was mild in comparison. The Italians seemed incredibly unwilling to fight, on court that is, off court the police saw to it that we were kept separated at all times. It all went very smoothly. My personal memory is of going to the toilet during the half-time break with Slovenian flag wrapped around me like a skirt and of the shocked stares of the Italian ladies.

The final-four tournament was held in Rome that year (Dvignimo roke gor, gremo na final four, bili smo v Milanu, gremo v Rim, Cibona je pičkin dim! – too rude to translate here, pm me :D). This time I think we were quite content to be in our favourite bar watching the game, Rome is about 777 km away after all and the dragon ride would be a pain.

Before the semi-final match against the Greek Olympiakos I had the most lucid and precise dream of my life. Unluckily, the dream was that Olimpija would lose by 9 points. Guess what happened. But in the match for the third place the players let out all that suppressed anger at my dream and killed the opponents, French Asvel, and it started when Milko broke the board:

What brought all that to mind, of course, is the basket world championship going on in Spain right now. We have yet to see if pain was put in Spain on purpose – so far Slovenia has won all their four games and it’s been beautiful.

Since independence in 1991 Slovenia has been a regular at championships but is still waiting for its first medal. Usually their goal is place 7, or 5. And then they are disappointed, and the nation with them, for coming seventh, or fifth. This year they are expecting absolutely nothing, with such a young team, important players out and all (as if the Phoenix Suns star and NBA Most Improved Player of 2014, and his brother, weren’t almost enough).

Either low expectations are a scam or somebody forgot to inform the players about it: it appears they will just keep winning, and que será será. 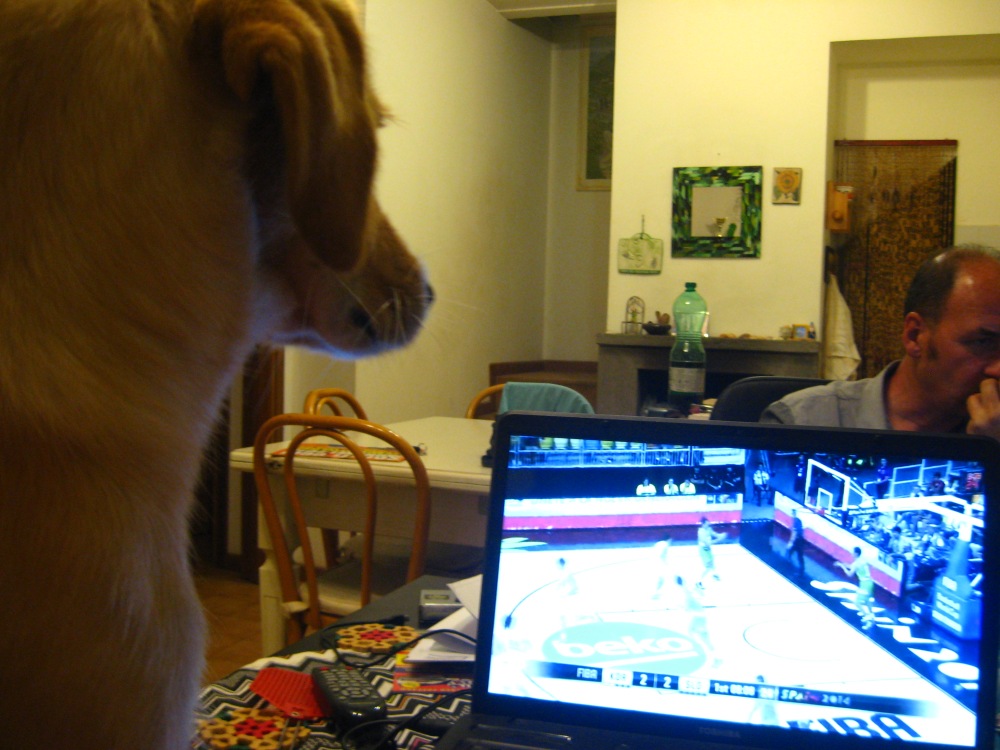 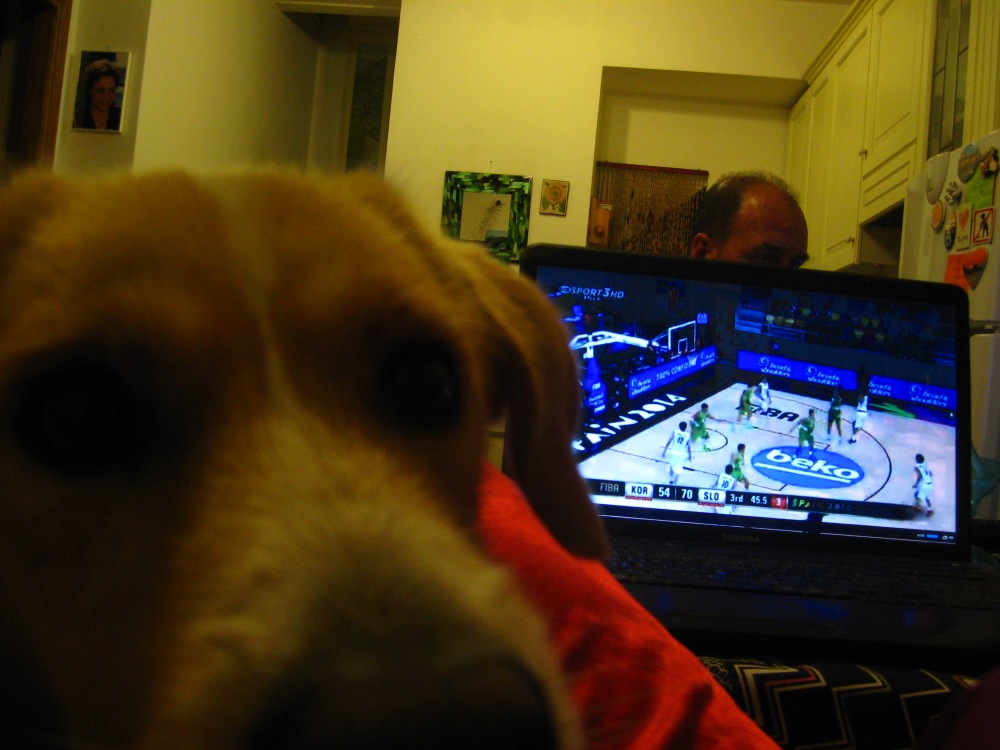