(This story has 1000 words. I said to myself before starting it that I want a millennium and ended, without looking, at 999. I think I might have found my natural format of expression.)

((None of the photos or cars in the links are mine, just the colour and type are the same: forest green for 404, light yellow for 504. The only thing mine are the remains on the wall.))

I travelled to the coast with my ex-ex-boyfriend to buy it. It was his idea. When we got there, the whole family greeted us, the kids were sad to see it go. It was so cheap. I was thinking how big the need must have been that they were selling something they loved so much, so cheap.

The car was a blast from the past, I felt like in a movie. The rockets and all. I placed some pillows on the back leather seats, it was that kind of car. Yet, i only remember one kiss in it. From a friend. A peck on the cheek that got me all flustered and thinking what-if thoughts.

I went to do the annual check-up an hour before closing time for Christmas. I needed merry mechanics. When I drove the car over the garage pit to be checked, I almost dropped it right into the pit, on purpose. I needed a certain degree of lenience. Indeed, my car passed the test, even though after the rain some rainwater splashed over my feet on every turn, and as I was leaving the mechanic smiled at me and said: “Just be sure you don’t use the hand brake too often”.

And then a friend spotted it. He and his cousin do Peugeots, it’s their sport. They know them. They travel all over Europe to bring one or two home. Or better, they used to. Nothing is old-car friendly anymore, unless you have veterans and do shows. But they were just driving them. And now they found my car to fix, which meant drink and smoke and get all dirty and blast out some Osibisa and drink some more. I liked it.

When my first Peugeot was not likely to pass any more tests, 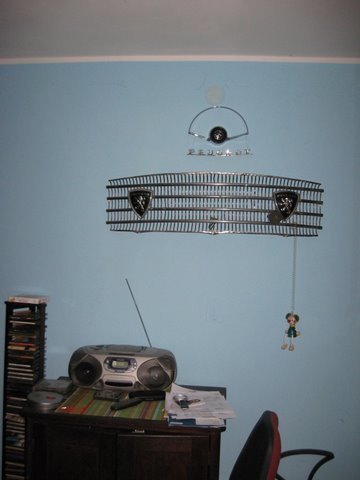 one of the cousins told me about my potential new car. 504, an upgrade.

The boyfriend was not there to witness it any more. I was alone and I was about to buy my first car on my own. The freedom which I was feeling as I was driving it home was all-inclusive. I can still smell it. And that interior too.

This was the car I was driving around the island of Crete for a month. The cousin was driving the other Peugeot, a newer one, 505, with an inflatable boat on the roof.

One time I was attempting to climb a terrain a bit too steep and the car slid back and got hooked on its hook. This was the only thing resembling an accident.

Sometimes it wouldn’t start and I had to open the hood and slam a beer bottle down on a particular spot.

Sometimes when it rained, all the electricity died and I had to drive it… quietly. But not a cloud was seen over the Crete for that entire August. It was hot, and I had to drive it with the heating on, or it would overheat. But nobody noticed that, the windows were always open anyway.

One time, parked for the night next to a precipice, the cousin tied his and my open doors together, to make a nice shelter from the wind which never stops in the south of Crete, so that we could boil some potatoes. I was cutting the cabbage for a salad. It was one of those moments when the happiness descends slowly and you can almost grab it. Even though during the night the wind won and a couple of armaflex beds were swept down into the abyss.

I remember the present my friend got me for a birthday. Original Peugeot yellow headlight bulbs. Not strictly within the local regulations, but still.

Here let me explore my perception of me as GF (which I used to think meant gender-fucked). I mean, show me a girl who would cherish such a gift and remember it better than all the cutie-girlie-sparkly-kitty stuff. Show me a girl who would wilfully walk a couple of miles to the basketball arena, alone, buy herself a beer, root for the home team and go back home, alone.

I remember the time when I owned more vests than skirts, most often used ones that dad discarded or was just about to when I pounced. To apply lipstick and eye-shadow was hard. To balance the heels was harder. But to slip on my father’s white scarf and hat was effortless. And the coat, oh, a long dark blue one. First I only wore it to concerts.

I remember the time in the 2nd year of high-school, vividly. Before, I wore mom’s red silky shirts to school, struggled with earrings, make-up, whorish result. And then I bought myself some boots, my first. Not the elegant style. These were light brown genderless efficient kind. They changed everything. Wearing them, I slipped into jeans, coats, vests next, instead. My style was born. I was so happy.

Gender comes late when I assess a person. I can immerse myself in a writing not knowing what gender the author is, and I couldn’t care less.

When battling my fellowmen in card tournaments, I often said that there was no sex in cards (because, of course, everything was fucking). Sometimes I would rave against giving out the best female awards at tournaments (admittedly, not rejecting them, shaaaaame on me). One time I came first, another female came second, and we joked that we would give out the award to the best male after careful consideration and possibly a lapdance.

It can be hard to go through life looking beyond gender, beyond sex, but it is the only way for me.

And as for the Peugeots, it’s my friend’s birthday one of these days. Nourishing, woman-loving, slightly reckless Aries. He has taught me a lot about maintenance, not just cars. He has taught me about relativity. He was dating my sister for many years but fathered a child elsewhere. Possibly, a shame, this. I’d love you in my family.